Not all bacteria are bad

Scientists: By 2050, Superbugs Will Kill 10 Million People a Year 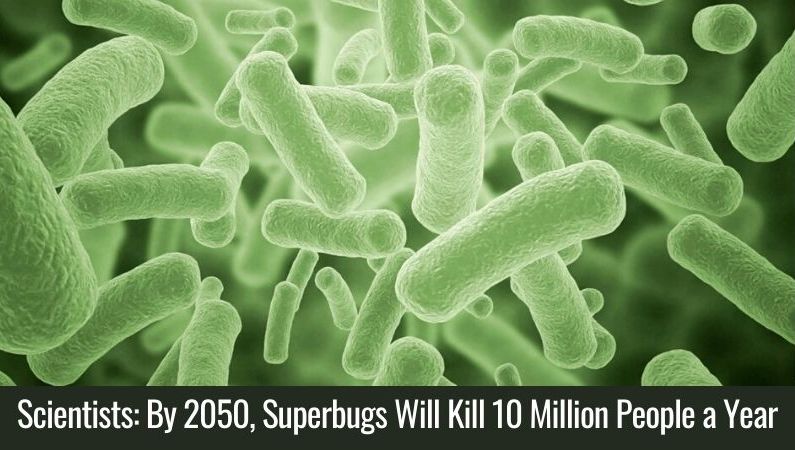 By 2050, unless urgent action is taken, someone on our planet will die every three seconds from diseases caused by antibiotic-resistant bacteria. This is the conclusion reached by the authors of a report ordered by the British authorities on the growing problem of antimicrobial resistance.

Humanity has recently been losing the battle against drug resistant infections, and the spread of drug-resistant bacteria has been described as a threat as serious as terrorism.

Currently, about 700 thousand people die every year from diseases caused by resistant bacteria.

The report, prepared by a team of leading experts led by economist Jim O’Neill, proposes a plan to prevent a situation in which medicine will be “thrown back into the Middle Ages.” The implementation of this plan will require billions of dollars in investment.

The authors of the report call for a radical change in the approach to the use of antibiotics and the launch of a massive educational campaign among the population of our planet.

The problem is that we do not make enough new antibiotics and we are ineffective in using the existing ones.

Since mid-2014, when this study began, more than a million people have died from resistant infections.

During this time, a bacterium was discovered that is not affected by colistin, an antibiotic that is usually used as a last resort when other drugs do not work.

WHO has already stated that humanity is entering a post-antibiotic era.

The report’s authors warn that things will only get worse in the future and predict that by 2050, 10 million people will die each year from antibiotic-resistant superbugs.

This will cause enormous financial damage to the global economy, which, according to these estimates, will reach $100 trillion by the middle of the century.

The report caused contradictory responses: some experts believe that the proposed measures are insufficient.

The authors of the report recommend to:

It is proposed to finance these projects through the deduction of a small part of the funds allocated for health care from national budgets, or through additional taxation of pharmaceutical companies that are not engaged in the development of new antibiotics.

“We need to educate the world in various ways about why it is so important to stop treating antibiotics like candy,” said the study leader Jim O’Neill. in the middle ages, people would die en masse.”

“We have come up with quite demanding recommendations urging all of us to leave our comfort zone, because if we do not do this, we will not be able to solve this problem,” he concluded.

“In addition to the moral side of the matter, there is also the economic one. The cost of inaction is too high to be considered as an option,” Treasury Secretary George Osborne said on this occasion.

“So I urge other finance ministers to come together this year and work with pharmaceutical industry leaders and medical experts to develop collaborative approaches,” Osborne said.

It is not yet clear how to get the pharmaceutical industry to invest in the development of new antibiotics. No new classes of antibiotics have emerged since the 1980s.

The problem is that if new antibiotics are developed, they will most likely be “shelved” in case of an emergency, so the pharmaceutical company cannot return the huge funds that it will need to spend on research and development.

John Rex, antibiotics officer at AstraZeneca, says there should be a new way to pay for antibiotic development, as suggested in the report.

“Antibiotics should be treated like the medical equivalent of a fire extinguisher. They should be available to doctors at all times and have an effect, even if not used regularly,” he says.

Jim O’Neill also criticized the use of antibiotics in agriculture, where they are used there to stimulate the growth of animals, rather than to treat them.

In the United States, about 70% of animals receive antibiotics as feed additives.

This practice carries the risk of spreading bacterial resistance to infections that infect humans. This is exactly what happened with the drug colistin.

“I am amazed that doctors still have to prescribe antibiotics based only on their immediate assessment of the patient’s symptoms, just as they did in the 1950s when antibiotics were first introduced,” he says.

The World Health Organization (WHO), the Wellcome Trust, and the Royal Society of Britain (Britain’s oldest scientific society) welcomed this report.

Good but not enough

However, Médecins Sans Frontières, Dr. Granja Bridgen, is not so optimistic.

“This report is an important first step towards correcting a widespread problem in the drug market,” he said, “but its authors did not go far enough.”

Médecins Sans Frontières says resistant infections are seriously challenging their work in parts of the world, from treating injured people in Jordan to caring for newborns in Niger.

“The O’Neill report proposes a new funding system designed to correct the gaps in pharmaceutical research and development, but the proposals do not guarantee access to existing tools or emerging new products,” he says.

“Instead, in some cases, the report suggests simply subsidizing higher prices rather than trying to lower them,” says Dr. Bridgen.

“A global approach to the problem has its drawbacks as money must be collected from many different sources. It will take time to implement these recommendations,” he says.

“It would be good to see the recommendations for the creation of new UK funds, as well as government action to resolve this problem in Britain,” says Colin Garnett.

“The great thing is that O’Neill’s team has highlighted the problems that we have to solve, but now we have to see concrete actions,” he concludes.

A dire future looms on the horizon. A future that will snatch from the hands of doctors one of the most powerful tools of modern medicine.

A simple cut on your finger can be fatal. Luck will play a more important role in your future than any doctor.

The simplest surgeries – removal of an appendix or a joint replacement – can make you struggle for your life with the last bit of strength.

Cancer treatment or organ transplants can kill you. Childbirth will again become a deadly event in a woman’s life. This is the future without antibiotics.

It all sounds like the plot of a science fiction novel. But there is a real danger that the world is heading towards a post-antibiotic era.

We're not around right now. But you can send us an email and we'll get back to you, asap.